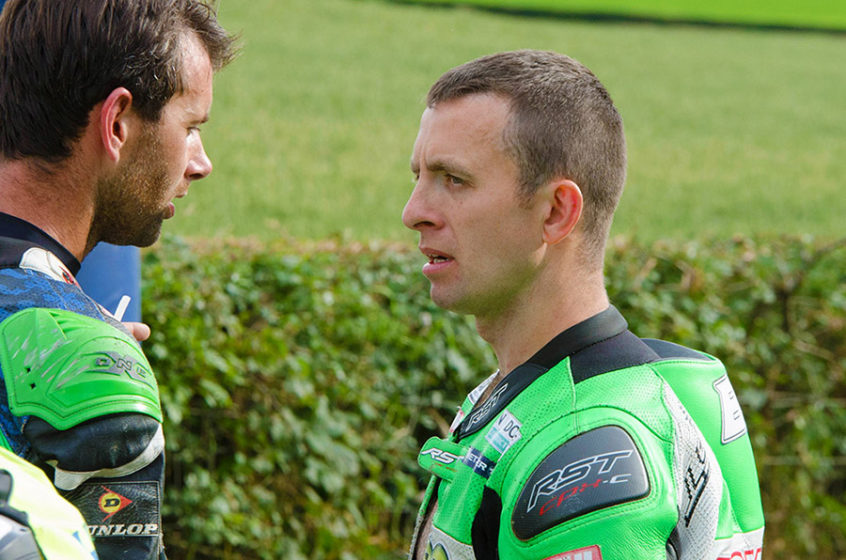 ARMOY Road Races have a bumper entry this year according to Bill Kennedy MBE, Clerk of the Course. With less than three weeks to the famous Bayview Hotel Race of Legends the eyes are all on who will turn up in Armoy.

The Club has confirmed Mullingar man Derek McGee will be back challenging for the Irish and Ulster road race championships in the Superbike, Supersport, Supertwin and Moto3 classes. Also confirmed is Dubliner Derek Shiels, currently leading the Irish and Ulster Superbike championship on the Burrows Engineering/RK Racing – Suzuki and on the back of his recent treble at the Skerries, he’s in terrific form.

In the Supersport, the likes of Thomas Maxwell from Westmeath, Kevin Fitzpatrick, Michael Sweeney and local rider Darryl Tweed are all in good form, and have confirmed their attendance as well as Englishman Sam West entering his first national road race, all aiming to steal the crown off returning Armoy Supersport winner from the Friday night race, Paul Jordan.

Bill Kennedy MBE said; “I’m very happy with the entries this year. We’ve some top class riders and it’s sure to make for some interesting riding on Race Day. We’ve a few entries from foreign riders, like Switzerland and German, and with 22 newcomers including the swiss rider; they come from Aberdeen to Somerset and from County Cork to Ballymoney, which goes to show just how attractive our 3.03 mile road race is.

“The Classics, although not everyone’s cup of tea, is this year a bit extra special for me given it’s the Frank Kennedy Classics. It has some interesting bikes and riders. Cheeky chappie, Dominic Herbertson from Hexham is on a Davies Motorsport Honda 4 and newcomer and Welsh man, Mark Purslow is on another Honda CB500 Four. Dominic is definitely one to watch having finished in the first 10 at the IOM Senior (Finale) superbike race. Throw into the mix, Barry Davidson with his 6 Armoy classic wins and the competition is wide open, so it will be very interesting indeed!

“Practice on Friday 26th July is followed by the Senior Support and then Supersport 1 Race; and in the past it has set the tone for the following 10 races on the Saturday. Our own club member and local man, Tommy Henry, is definitely fighting it out at the top of the leader board in the Irish Championship with Bangor man, Andy McAllister, so I’m going to say the Senior Support is equally going to have some exciting racing.

“The Clyde Shanks Supertwins is always a hugely popular race at Armoy, and we’ve a full grid there as has the majority of the races. We are very fortunate this year given there’s another race in England that so many riders have decided to come to Armoy.

“Gary (Dunlop) has been in winning form, currently leading the Irish and Ulster Moto 3/125 GP championship and we’ve a very decent entry for that race too. It’ll be great to see his bike in his father’s (Joey’s) winning colours.

“To be honest I really wasn’t sure how entries would be this year, you just never know, but I am really delighted to see so many make the effort to come along, a big thank you to all of them. Now we just need the weather and the fans!”

Please support the Armoy Road Races by buying a programme with a full list of entries inside. They are available from the AMRRC office and the Petrol Station in Armoy Thursday 18th July 2019 and cost £15.00 or €18