The Armoy Armada was established in 1977 and consisted of Mervyn Robinson, Joey Dunlop, Frank Kennedy & Jim Dunlop. The Heritage and now Legendary Status of the Armoy Armada covered only 3 seasons of racing from 1977 to 1979, during that time these men demonstrated acts of commitment, dedication, camaraderie and talent. Qualities that confirmed the Armoy Armada as legends in the sport of Road Racing. 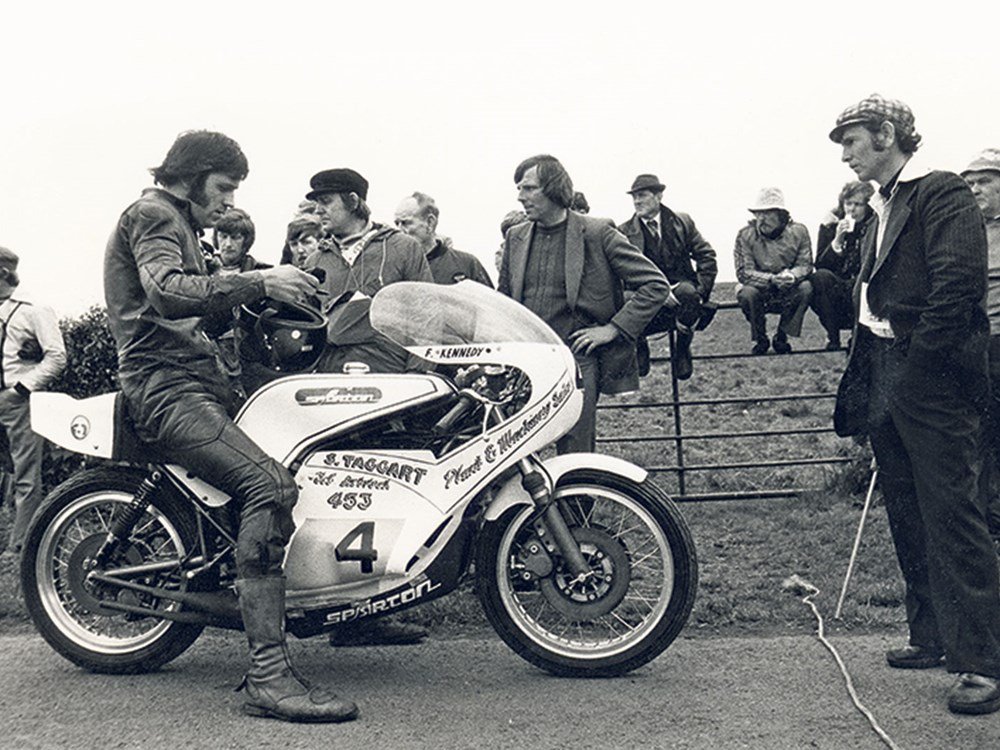 Frank Kennedy also known as ‘Big Frank’ stood at over 6 feet; he was so tall he towered over even the biggest of motorbikes which made racing that little bit more difficult. Frank was prone to accidents, though this did not hinder his dedication to road racing; he was once seen jumping on the back of a motorbike with two broken legs!!

Frank owned a car showroom near Armoy which produced good business for him, although most of the profits were pumped into his bikes.

A career best for ‘Big Frank’ was in the 1976 North West 200 when he was placed second to the English rider Martin Sharpe. Sadly Frank’s motor racing career and life were cut short when he was seriously injured in 1979 at North West 200. 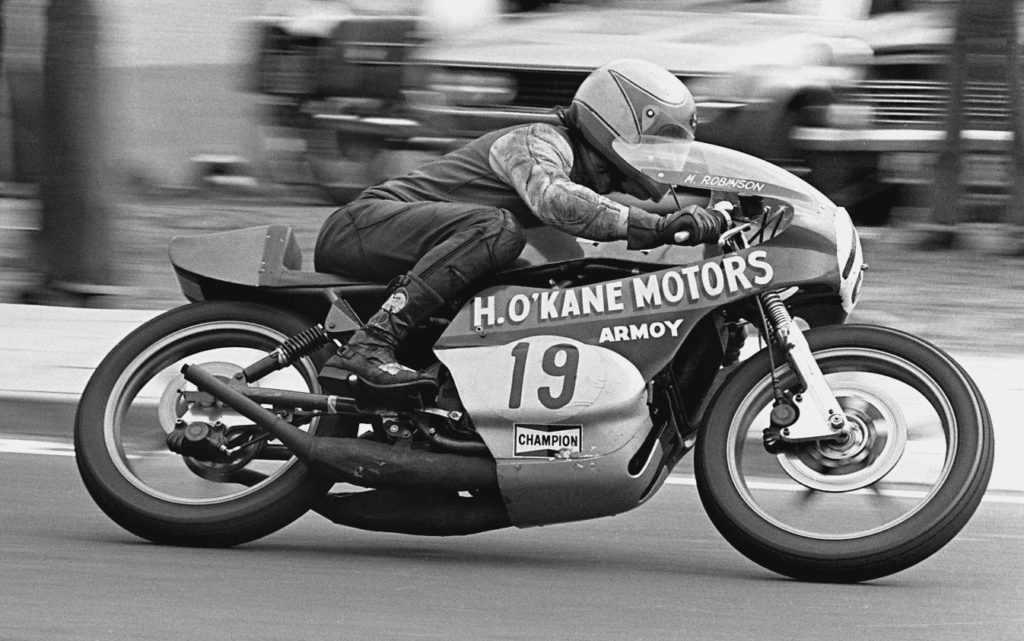 Mervyn, Robo, Robinson’s racing career began in 1968. He had great passion for road racing and it was Mervyn’s enthusiasm that got Joey Dunlop interested in the sport. He was a mechanic by trade and could fix anything; Mervyns technical ability enabled him to make unused bikes and bike parts road worthy once again.

Mervyn had his first win in 1974 at Kirkistown racetrack, but it was his victory at the 1975 Ulster Grand Prix that proved one of the finest moments and achievement in his career.

Mervyn’s racing career and life were cut unfairly short when he crashed at the 1980 Northwest 200 in the 500cc race. He lost control at the dreaded Mather’s Cross, a sharp bend in the Portrush road.

Mervyn’s son Paul is a regular racer at the Armoy Races. 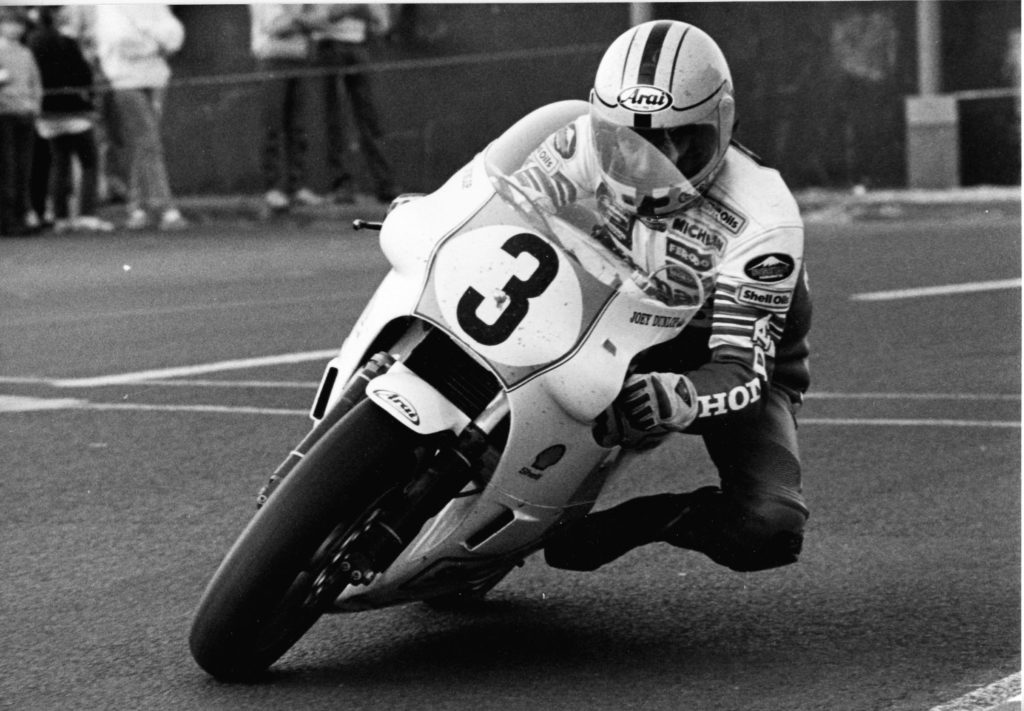 Joey took an interest in motoring racing at an early age, as his passion for the sport grew he soon realised that racing motorbikes was his future in life. Joey had been racing from the age of 15, his first racing bike was a 199cc Tiger Cub which cost £50.

In later years it was soon easy to spot him with his distinctive yellow helmet and his personal racing number 3.

The first of Joey’s record breaking 26 TT wins came in the 1977 Jubilee Classic Race. He won the TT Formula 1 Race six years in a row between 1983 and 1988 and was also Formula 1 World Champion five times. One of his most notable accomplishments was his three hat-tricks- 1985 F1, Senior and Junior, 1988 F1, Senior and Junior and in 2000 the Formula One, Lightweight and Ultra Lightweight. Joey is the only rider to do this and justifies why ‘The Girk’ is a rightful legend in the sport of Road racing.

In 1986 Joey was awarded an MBE for his contribution to motor racing. He also received an OBE in 1995 in recognition of his charity work. In 1993 Joey was granted Honorary Freeman of Ballymoney Borough and further to this in 2000 he was awarded the Manx Sword of State in the Isle of Man.

In 2000 at the age of 48 just weeks after winning his final Isle of Man TT, Joey sadly died as a result of a crash in the Republic of Estonia.

Fifty thousand mourners attended the funeral, which was attended by bikers from across Ireland and the United Kingdom. A memorial statue was erected in his home town of Ballymoney, Northern Ireland. In the true sense of the word Joey was the ‘King of the Road’.

Joey’s son Gary is still involved with 2 stroke motorbikes and runs his own team who race at the Armoy Races.

Jim Dunlop, the only surviving member of the Armada foursome, was the younger brother of Joey and the older brother of Robert. 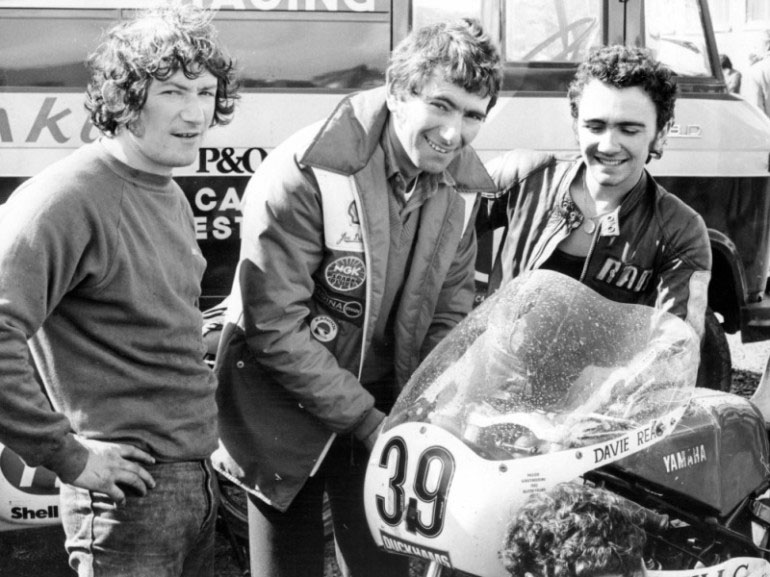 His enthusiasm for Road Racing grew from an early age. He has many achievements to his name. He took part in the Isle of Man competitions from 1977 to 1981 with his brothers Joey and Robert.

Recently Jim unveiled a specially-commissioned sculpture – a motorbike, shaped in stone by the Belfast artists Mark Anthony and Sean Doyle. The monument is tribute to the achievements and successes of the Armoy Armada and their commitment to road racing throughout the years. 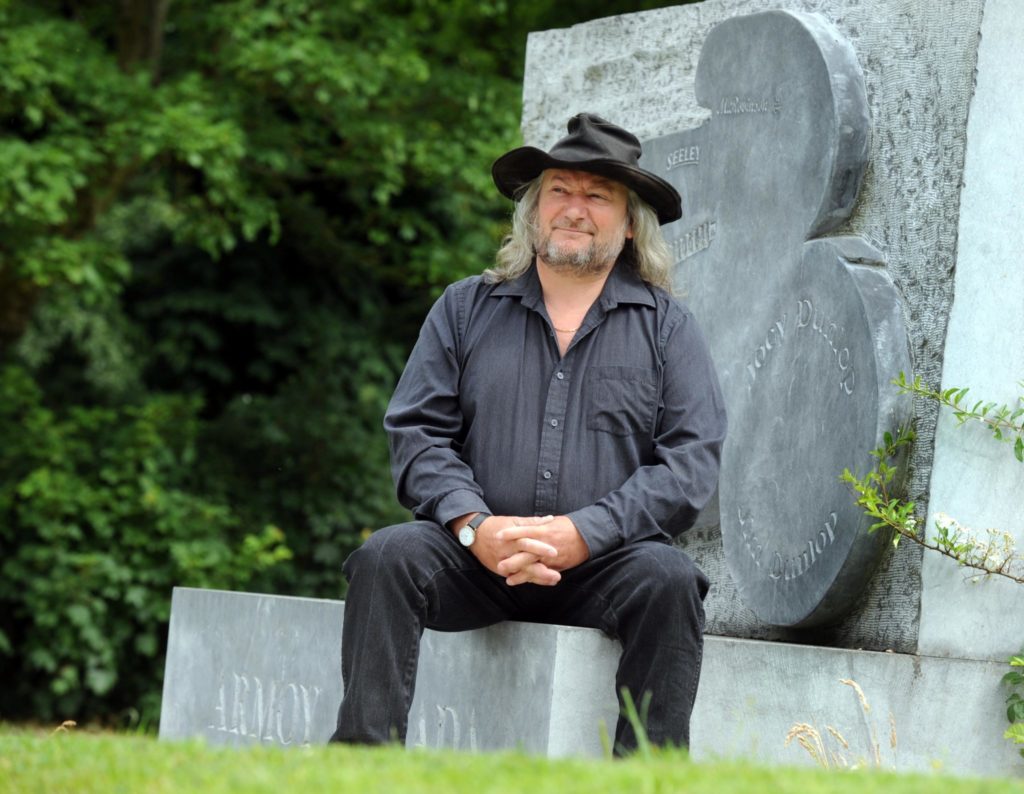 Jim’s son Sam is a regular racer at Armoy. 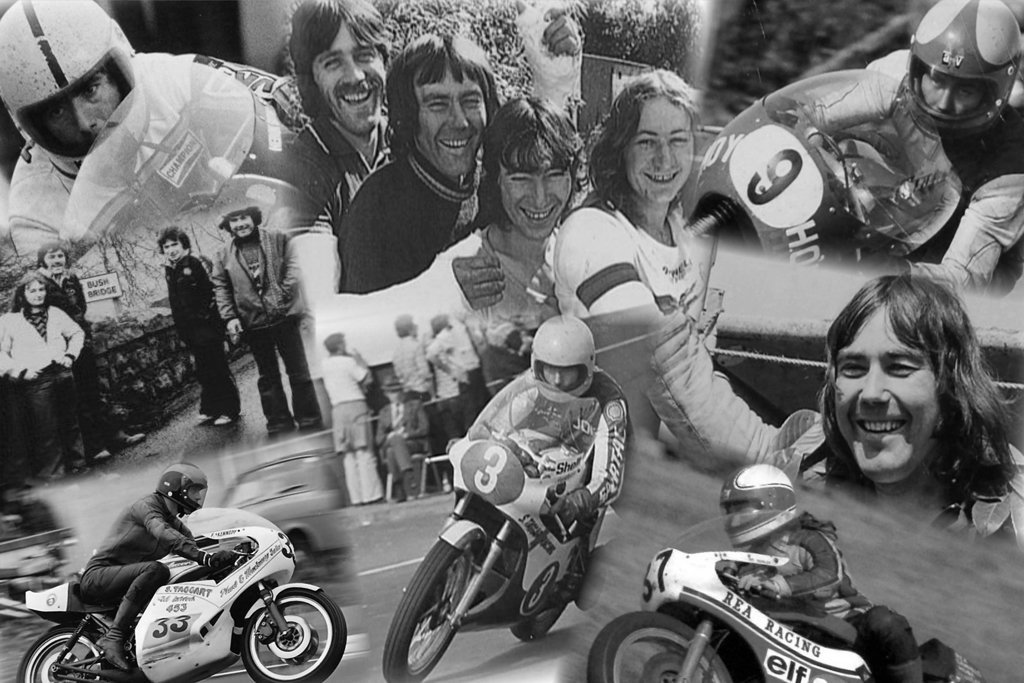