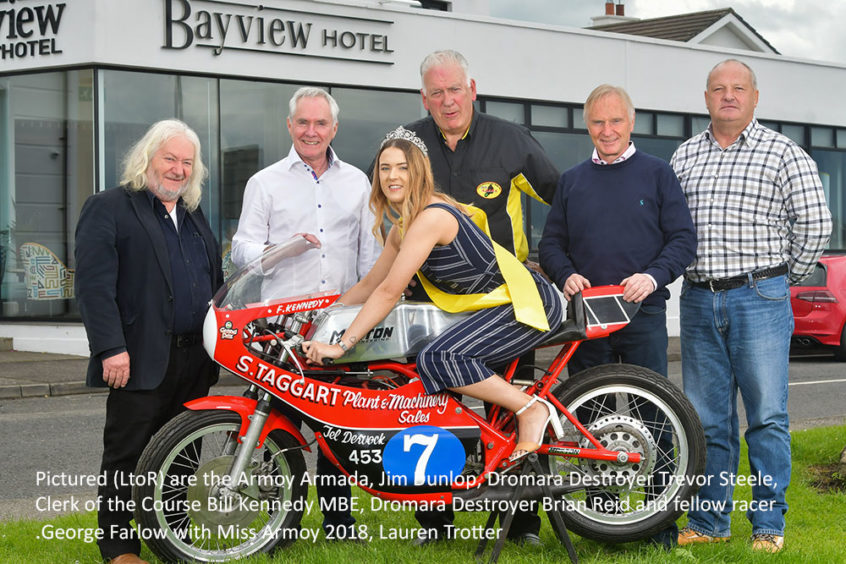 AS the Armoy Motorcycling Road Racing Club launched the 2019 Bayview Hotel Armoy Road Races, Frank Kennedy, one of the admired Armoy Armada, was not too far away from the thoughts of the many attending and one man in particular.

This year will see a commemorative programme, where Frank Kennedy’s racing highlights will be celebrated and brother, Bill Kennedy MBE, who is also the Clerk of the Course, will sponsor a new senior classic road race.

The Armoy Armada was established in 1977 and covered three seasons until 1979. The group consisted of Mervyn Robinson, Frank Kennedy and brothers Joey and Jim Dunlop. The Armoy Road Races 2019 will see the exploits of Frank Kennedy, who succumbed to serious injuries following a road race accident at the NW200 in 1979 forty years ago, remembered and celebrated.

It was Frank and his three fellow road racers that not only became the inspiration of the Club today but of many of today’s road racers and this year, the Armoy Road Races will once again welcome some of the best-known riders both locally and internationally to their picturesque village of Armoy, County Antrim, for a weekend of world class road racing.

Marking the official launch, the Armoy Motorcycle Road Racing Club, had invited the passionate racing community to an event, hosted by title sponsor, the Bayview Hotel on Wednesday 19th June.

Compered by Geoff McMullan and Phillip McCallen, the launch saw road racers, from the 1970s and today, sponsors, invited guests and club members come together to celebrate the Armoy Road Races. There was a panel discussion, which included Brian Reid and Trevor Steele, members of the Dromara Destroyers, the Armoy Armada’s arch rivals, George Farlow, an underling of Frank Kennedy, sponsors and some of the best of racing talent, Northern Ireland has to offer. Jim Dunlop of the Armoy Armada also attended.

Following the launch, Clerk of the Course, Bill Kennedy MBE said, “It is forty years since my brother Frank died and I just couldn’t let this year go by without marking it. I went with Frank to many of the road races where I would have helped with the bike and on the very rare occasion would have raced myself. Racing wasn’t easy for Big Frank, he was well over six feet tall and he was prone to many an injury.

“Frank and the rest of the boys in the Armoy Armada created something extremely special in those days. Today and over the last week of July this year, we will remember their acts of commitment, dedication, camaraderie and talent – it is those qualities that have confirmed them as legends in this sport and it is that which the Armoy Road Races are built on.

“Today, I’m especially delighted with the turn out for the launch. It is a great reflection on the Club, this road race and what we can expect from the races this year. After last year’s challenges, we’ve been working hard to ensure that we’ve a solid entry and I’m sure there will be more details in the coming weeks of who’s who, as the Isle of Man TT is just finished and many riders are only turning their attention to the Armoy Road Races now. Race entries don’t close until Monday 1st July and I’m confident that we will attract more of the best road racers.”

Bill continued; “Last year, on the Friday, we saw two of the closest races we’ve had at Armoy. It was Paul Jordan that clinched the top spot from Adam (McLean) by just half a wheel. Undoubtedly 2019 will see not only a great Bike Week with a jam-packed programme of events but some of the best road racing this year.

“Once again, I implore all fans to make your way to Armoy in the last week of July – as only there you’ll find the heartbeat of road racing and as we remember those Armoy Armada members including my brother Frank – you’ll also find today’s road racers and their passion, commitment and dedication – we must support them!”