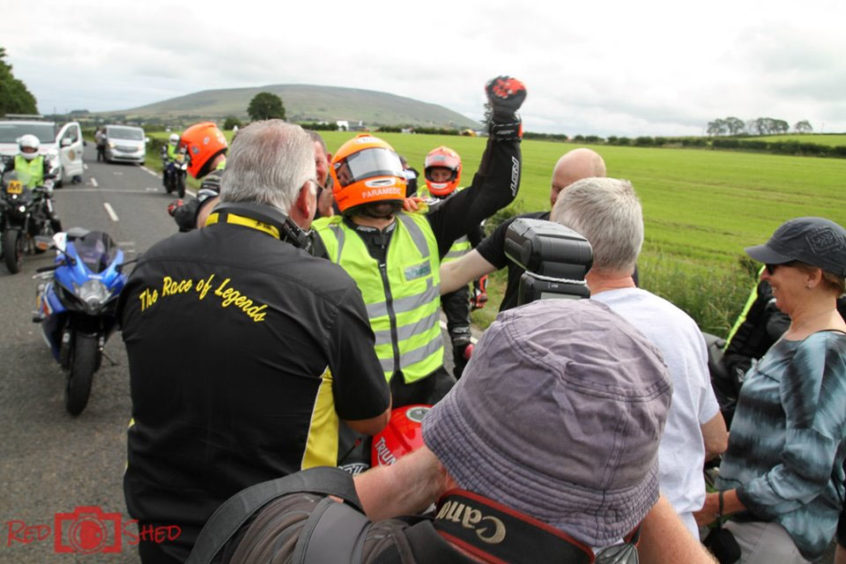 What a difference a year makes. The day started off from where we left it last year, with travelling Paramedic Allister MacSorley completing his lap of the course. Watched by family, work colleagues, friends and the spectators, it was an emotional return but also a celebration where champagne corks were popped and the feel good factor returned to a race day that enjoyed better weather.

On the track we had a new lap record of 90.19mph set in the Moto 3 from Derek McGee, Ed Manly smashed the 350cc Junior classic lap record at 83.43mph and in the Frank Kennedy 40th anniversary Senior classics, the lap records tumbled with Barry Davison doing 83.40mph, setting the new 500cc lap record with Richard Ford racing at 87.18mph set the new 1000cc record.

We’d great performances from local riders Darryl Tweed, Ryan Fenton and Tommy Henry who won the Friday Senior Support race that has probably secured him the Ulster Championship.  Of course the performance of the day went to injured rider Michael Dunlop who won both superbike races, including the Race of Legends for an amazing eighth time. The spectators were rapturous with their applause.

A full media release and an update on both injured riders, who we wish a speedy recovery will follow shortly, in the meantime we’d like to thank all the marshals, officials, volunteers, residents, spectators and of course the riders for an excellent event and confirming the Armoy Road Races as the ‘Race of Legends’