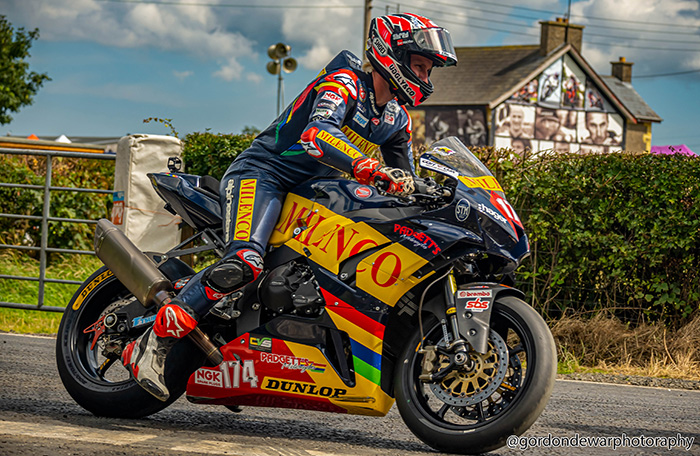 EVEN with earlier road closing times, every minute counted over the two day road race meeting at this years Armoy Road Races.

Friday presented a day of practice and qualifying races however with a major oil spill and a number of red flags, rain finally halted the programme as riders gathered on the grid to run the Hilton Supersport 600cc race as the heavens opened.

Saturday began with a damp and wet course but once racing began and the weather improved, it was with a proposed 14 race programme with the two races from the previous evening starting the day.

Bill Kennedy MBE, Chairman of the Armoy Motorcycle Road Racing Club and Clerk of the Course, said, “We went out on a high. It was a long two days, and I can’t thank all of the riders that came and put a show on for the fans. There was some terrific racing but by far the best race of the day was the Galgorm Supertwins where it was almost a photo finish with newcomer Jamie Coward, Michael Sweeney and Paul Jordan. It was just incredible and a contender for race of the season.

“However, it was Man of the Meeting, Davey Todd that dominated the competition, he had told me some time ago that this was one of his favourite circuits and had been telling me all year that he hoped he could come back, and we were delighted when he did. He absolutely loves the course so well done Davey with all his wins and new lap record.

“There was not a bad race in it, it was a great day of racing from riders, near and far. You just have to look at the top ten riders in the Bayview Hotel Race of Legends and every one of them are top riders. I’ve had some feedback from visiting riders who were here for the first time, and they just loved the circuit but what made it really special for them was the reception from the fans when they slowed down they could hear them clapping – everyone felt very welcomed and everyone said they can’t wait to be back here next year.

“I also have to mention our local riders, particularly Darryl Tweed, who was on the front cover of our programme. He’s a big favourite with the fans and what a performance between him and Todd during the Hilton Car Sales Supersport that he put on. It was also great to see privateer Neil Kernohan, another local favourite, who’s a lovely fella and a very good racer. We saw him battle down through the field, I think in the Euro Autospares Open, to come a very credible ninth. Well done, Neil.

“A highlight this year was the introduction of the new Steadplan Sales Classic Superbike and the quality of riders in this category and seeing and hearing these bikes was just tremendous. It’s a class that is going to catch on. I had so many riders say to me they had a bike in the garage but not prepped and if they had known about it, they would have been here. So, I look forward to what next year holds for that race but well done Jamie [Coward] on winning it this year – I think Steadplan were delighted to be handing over the winning trophy to their own rider.”

When asked who stood out over the last two days, Bill added: “All in all I could name 20 riders who stood out but there is a big fella Matt Stevenson, former Manx grand prix winner, and in my opinion, he’ll be one to watch and I think he had a really good Armoy.”

“I have to also thank the fans. We had a magnificent crowd. I thought it would be difficult to beat the crowds from last year but on both sides of the road from the various viewing points the crowds were massive. I’ve had more people than I ever knew come up to me and comment that they never seem so many people at Armoy as they did this year – so we must be doing something right.”

“There is no doubt we had our challenges, on Friday the weather beat us in the end, the major oil spill on Friday was time consuming, but everyone knew where they were starting on the grid come Saturday. Overall, we had six red flags and nine riders down and my understanding is that all will be going home today [Sunday] but I’ll be checking in on everyone.

“Two other groups I need to thank. The support from our key sponsors, has been just amazing, as always. To our main sponsor Bayview Hotel and the many race sponsors, Mermaid Club, Diamond Bar, Hilton Car Sales, James McKillop, JW Hickinson & Co, MJF Construction, Steadplan Sales, Lunneys Electrical, Bluesky Resource Recovery, Euro Autospares, Tilesplus, Galgorm, Clyde Shanks, Torra Homes, Park Electrical Services and Davey Chambers, Bradmoto, I’d like to say a sincere thank you to each and every one.

“We’ve had so many others help too, those who sponsor a bale or take an advertisement in the programme and especially those who support the races by buying the programmes and parking, it’s all vital as part of the funding in the running of the event. However, none of it works without the help and assistance of the volunteers and the Club members. There are many that go above and beyond, giving of their time freely with nothing in exchange other than putting on a great race meeting. Some do give more than their time and one example of this is our own club member, Paul McAuley, who kindly sponsors the Man of the Meeting and is responsible for the course looking in excellent condition and as safe as can possibly be. There are so many volunteers who play a vital part in the running of these races.”

“Now that they are over there’s still much work to do and possible a little reflection. Our first job, though, is to dismantle the course, return Armoy to the beautiful village it is and thereafter we will and, in due course, begin our preparations for 2023.”

The Armoy Road Races event is enabled by funding from Causeway Coast and Glens Borough Council.