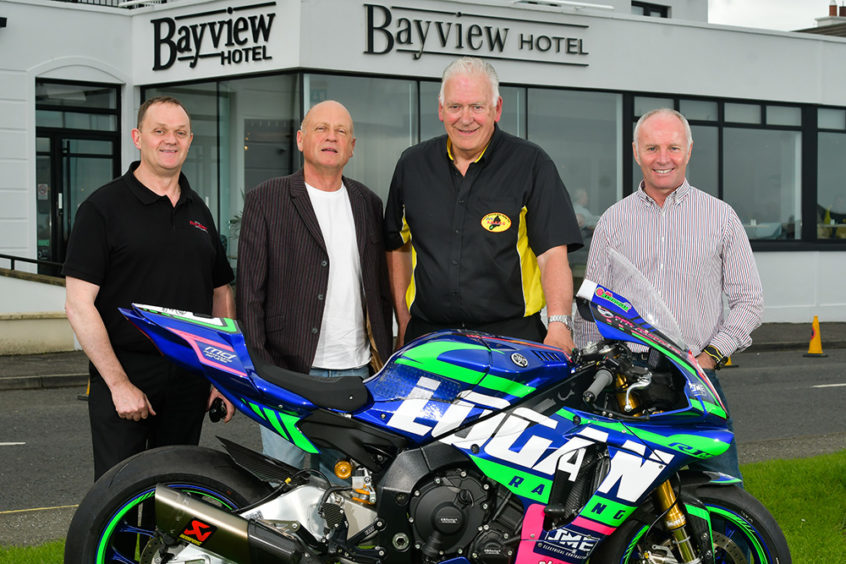 New Sponsor For Open Race Endorses Armoy Road Races. WHEN the call went out for new sponsors one man from England answered it and all for his love of road racing.

Mr John Massey, entrepreneur and property investor, is a fan of road racing and when he heard that race sponsors were needed for the Armoy Road Races he was only too happy to oblige. He said, “I’ve watched the Armoy Road Races from afar and to be honest, I’ve been caught up in the nostalgia and camaraderie that is associated with them. I love all that they do and having met with both club members and other sponsors recently at the launch in the Bayview Hotel, I really can’t wait until the Races.”

Mr Massey will be sponsoring the Open Race under hemelflatstudios.co.uk and is looking forward to spending some time with his new road racing family in just a few weeks’ time.

John continued: “I had the great privilege of speaking with Jim Dunlop and his son, Sam, at the launch. I’m familiar with the Dunlop name and watched the family for many, many years but to sit down and have a chat and talk of the world of road racing was so special to me – both are exceptional men.

“The room that day had quite a few road racers in it from days gone by and it was great to listen to the rivalry between the Armoy Armada and the Dromara Destroyers. My company specialises in affordable rental studio flats in Hemel Hempstead and although there are no direct links with the races there is an appreciation of tradition and heritage, which is synonymous with the Armoy Motorcycle Road Racing Club.

“During the launch, I also had the opportunity to talk to Bill (Kennedy) and his colleagues in the Club and I couldn’t have got a warmer welcome. I’m only too delighted to be able to assist them as I suspect after last year’s cancelled races and lack of funding it probably has been difficult enough for them. I know I’m only playing a small part but I suppose if we all do that then we’ll have a wonderful few days of racing.”

Bill Kennedy MBE, Clerk of the Course said, “I say it every year, but the club truly is indebted to our sponsors, without them, the Armoy Road Races and Race of Legends would not be possible. John (Massey) epitomises all that is good about road racing. A man who loves our sport who wants to help and who has just done that, so thank you, John.

“Supporting the club for many years is Molly’s Bar and Restaurant, which is sponsoring the Moto 3/GP 125c; local woman, Fay Stewart, is sponsoring the Junior Classics and the Diamond Bar and Mermaid Club are joint sponsors of the Lightweight Super Sport Race.”

New sponsor for Armoy Road Races with an appreciation of tradition and heritage with a few road racing legends. John Massey is pictured is with Phillip McCallen, Bill Kennedy MBE, Clerk of the Course and road racer Ian Lougher.