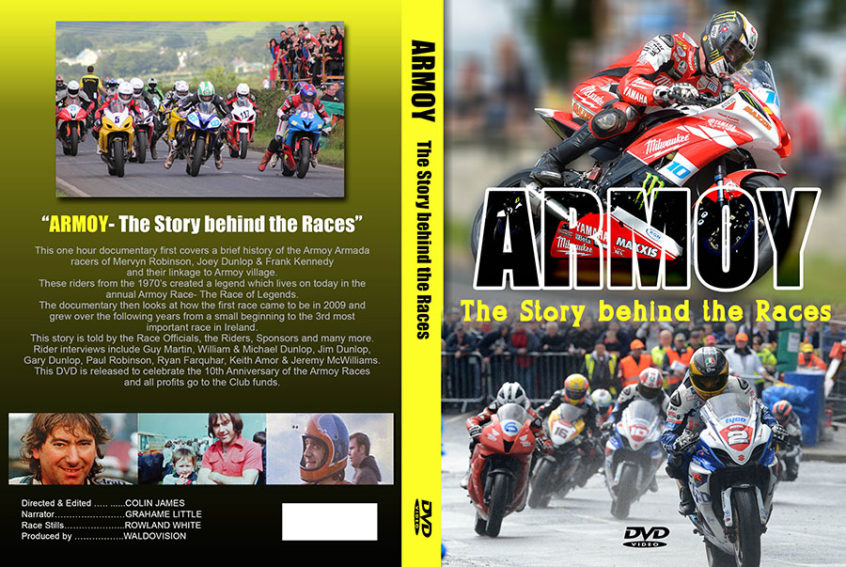 ROAD racing fanatic and videographer Colin James from Helen’s Bay tell the story of the legendary Armoy Armada in an exclusive film, ‘ARMOY – The Story behind the Races,’ which documents the journey of the Armoy Road Races as it celebrates its 10th anniversary in 2018.

With the Armoy Road Races set to make a big return on Friday 27th and Saturday 28th July, this one-hour documentary covers a brief history about the Armoy Armada team and focusses on the development of the Armoy Road Races since its inaugural race in 2009 and up to 2014, when it achieved national status with Channel 4 coverage, now known as one of the largest national road races in Ireland.

Speaking to race officials, riders and sponsors from the few years, this documentary takes an in-depth look at the people behind the scenes who are dedicated to honouring the legacy of the Armoy Armada.

Videographer and creator of the film, Colin James said, “The idea for this 10th anniversary came from Bill himself in 2009, he asked me to record the story of the races over each year in anticipation of a 10th anniversary film. This film has been a long time coming, it is a real passionate project for me and I am very proud of the finished product.”

Retiring almost 15 years ago, Colin James alongside his brother Alwyn set up a video production company, Waldovision, with the idea to create and promote films dedicated to road racing.

Colin and Alwyn have a history of making programmes from the 1970s for TV with films like ‘UGP 1975’, ‘Raining Champions’ and ‘The Killer Swim’ made for BBC NI, which in turn enabled them to create an archive of unique road racing coverage. In the early 2000s they successfully pitched to BBC NI for a series about the 1970s racing to be called ‘The Charge of the Bike Brigade.’ This four-part series was very successful and the BBC commissioned a follow up programme called ‘The Fan’s Story.’ Over the next few years, before they retired from TV production in 2014, they continued to make TV documentaries to include ‘Joey Dunlop Remembered’ and ‘How the NW was Won’ for BBC NI and ‘Stanley Woods- Forgotten Hero’ for RTE. They also made ‘A Funny Thing Happened on the Way through the Troubles’ for BBC NI. Their programme ‘How the NW was Won’ was also shown nationally on BBC4.  Since retiring they have concentrated on DVD programmes including ‘Joey Dunlop- No Ordinary Joe’, ‘Joey, Ray & Rivals’, ‘The History of the NW200 – The 1990s’, ‘Richard Britton’, ‘Alastair Seeley’ and ‘The Gardens of Mount Stewart.’

Honouring the Armoy Armada, Joey Dunlop, Mervyn Robinson, Frank Kennedy and Jim Dunlop, the famous Armoy Road Races was launched in their honour and continues to grow from strength to strength till this day.

Colin continues, “I have always admired the spirit and the success of the Armoy Motorcycle Road Racing Club so much so that I actually became a club member myself!”

Bill Kennedy MBE, Chairman and Clerk of the Course said, “I knew Colin would do a tremendous job in honouring the last ten years of the Armoy Road Races, it is a true testament to every person who has supported us throughout the years and I’ve had a sneak preview of the finished product and it’s just great.”

The DVD will premiere on Wednesday 25th July at the Armoy Community Hall at 8.30pm and will be on sale from Sunday 23rd July at a cost of £10. You will have the opportunity to buy the DVD on the night of the film premiere, all profits will go directly to the Armoy Motorcycle Road Racing Club.

Colin continues, “It was an absolute pleasure to work with the Club over the last ten years and I hope that everyone loves the film and see it as a true reflection of to the dedication of the Club in honouring the Armoy Armada even after all these years.”

Bill concludes, “I would like to thank Colin and his team for his hard work and would encourage you all to join us at the premiere in the Community Hall, it will be a fantastic watch and enjoyed even more being surrounded by the people who made it happen.”