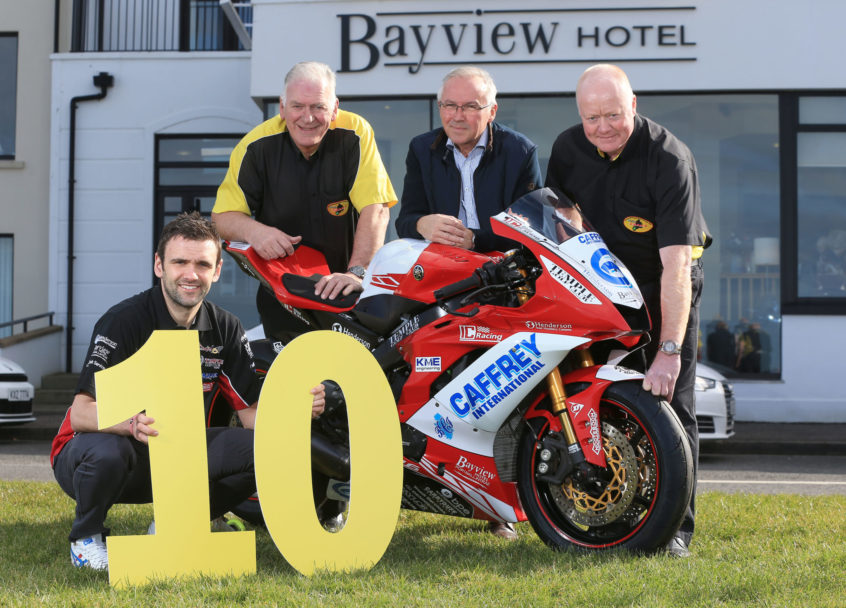 Located in Lonely Planet’s best region to visit in 2018, overlooking the Causeway coastline in Portballintrae, the Bayview Hotel is a family run local business, which specialises in promoting Northern Ireland as the perfect alternative holiday destination.

The Bayview Hotel has sponsored a race every year since Armoy’s inaugural race in 2009, and Trevor Kane, owner of Bayview Hotel has made the decision to take the lead and drive the 10th anniversary celebrations as a means of commemorating his very own ten-year milestone.

Born from an initial idea by the locals in 2007, the Armoy Road Races has continued to grow from strength to strength, now positioning itself as one of the biggest national road races in Ireland, welcoming an increasing number of spectators and bike enthusiasts each year.

Bill Kennedy MBE, Clerk of the Course said, “As it’s our 10th anniversary, we knew this year had to be extra special and I am thrilled the Bayview Hotel has come on board to help us celebrate, I have no doubt that this will be the best year yet.

“As the races are part funded by Tourism Northern Ireland and the Causeway Coast and Glens Borough Council, one of our main goals this year is to further promote County Antrim and the Causeway Coast and Glens as a popular tourist spot. In saying this, we hope to encourage visitors to lengthen their stay, having the Bayview Hotel as title sponsor will be a key driver in achieving this goal.

“We’ve come a long way since our very first Armoy Road Races and Race of Legends event in 2009 and I am very proud that we continue the strong association with the heritage of the club. I hope that this is only the first of many milestones, and I look forward to celebrating what we have achieved to date.”

As one of Northern Ireland’s prime motorsport gatherings, the Armoy Road Races has a rich history of bringing together the best known riders both locally and internationally, with this year set to be no different. More information on who will be taking part will be released in the coming weeks and months.

Trevor Kane, Owner of Bayview Hotel comments, “Working in the hospitality sector over the past ten years, I have seen how the Armoy Road Races has been significant in welcoming tourism to the area, profiling Northern Ireland as the number one destination for road racing.

“As a local company, one of our core beliefs is to serve the community and assist in driving the local tourism sector, therefore this partnership will build on what we, as a community, have achieved to date and encourage its continual growth.”

Bill continues, “On behalf of the club and personally, I would like to thank Trevor Kane for his commitment this year to the Armoy Road Races. To be celebrating our 10th anniversary alongside the Bayview Hotel is very poignant and I have no doubt we will be able to honour this milestone for ourselves and for Trevor.”

Trevor comments, “The fact that 2018 marks the 10th anniversary of, not only the races but the Bayview Hotel, it seemed only fitting and made for a very easy decision to become title sponsor. I look forward to the celebrations and of course some fantastic road racing at, in my opinion, the best national road race there is.”

The Bayview Hotel also sponsors William Dunlop along with Temple Golf Club, Caffrey International and Henderson Food Machinery. William, a strong supporter of the Armoy Road Races, has raced every year since its inauguration. William welcomed the news by saying, “I’m looking forward this to season. I’m just home from some practice in Spain and it is going well.

“Having my team and bikes in place in January, the additional time on the bikes, I’m very happy with where things are at the moment. Armoy is a firm favourite with me, it’s very hard to believe it’s 10 years and I wish the Club well.”

The festivities begin with a black tie dinner hosted by the Armoy Motorcycle Road Racing Club, which will be held in the Royal Court Hotel on Friday 11th May. To book your ticket, please contact William Munnis on 077 0319 2020 or [email protected] Tickets are priced at £40.00 per person.