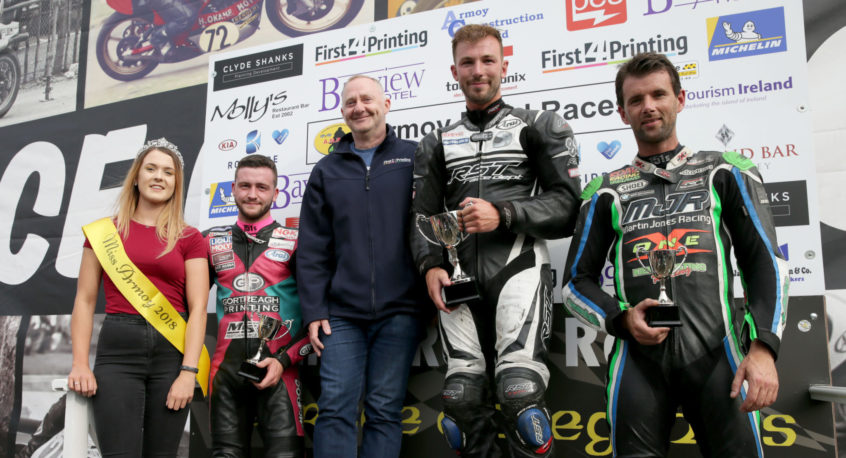 WITH the work of the 10th anniversary Armoy Road Races coming to a close, the Armoy Motorcycle Road Racing Club has been reflecting on what has been a significant year for the club and the wider racing community.

The 10th anniversary Bayview Hotel Race of Legends 2018, was set to be a tremendous weekend of world-class racing, following a dedicated year-long preparation for the highly anticipated event.

With the weather this year said to be one of the greatest summers in history, the hugely successful bike week attracted a record number of visitors, who were entertained by a range of activities from the renowned bike run to the launch of a new 10th anniversary DVD. On Friday 27th July, the Bayview Hotel Race of Legends 2018, began with two fantastic races bathed in summer sunshine. However, Saturday’s nine race programme was not meant to be, with the 10th anniversary abandoned due to horrific weather conditions.

Reflecting on the year to date, Club President and Clerk of the Course, Bill Kennedy MBE stated, “It’s safe to say the 10th anniversary will be one to remember and not for the reasons we had hoped. To say I was disappointed with the conditions on the day, is an understatement. But looking back, I know the right decision was made in the interest of safety.”

With sales of programmes only a mere 25% from previous years, it has been a tough year for the club. However, despite the lack of funding from Tourism Northern Ireland, the 10th anniversary celebrations were supported locally through a range of loyal sponsors including headline sponsor, the Bayview Hotel as well as Tourism Ireland and the Causeway Coast and Glens Borough Council.

Bill continues, “However, it’s not all doom and gloom, we had a fantastic bike week which was very well received and attended with folk from near and far, and I thank everyone for coming out to show their support in the run up to the races.

“Even though the races, didn’t take place on the Saturday, I think it’s important to note the hard work and costs that goes into the preparation and this is where the support is greatly appreciated.

“It is during these challenging times, that the racing community really shines through. As a solely volunteer driven club, without the support from our sponsors and the local community, the Armoy Road Races would not be viable, and it was the 10th anniversary that really showcased the proud community that we have.

“I just wanted to take a moment to thank every sponsor who supported us this year, from our main sponsor, the Bayview Hotel to the many race sponsors, First4Printing, Mermaid Club, Armoy Homes, Molly’s Restaurant and Bar, Fay Stewart, Roadside Kia, Torquetronix, JW Hickinson & Co, Diamond Bar, Clyde Shanks, Bathshack, Michelin Tyre PLC, Park Electrical Services, CP Hire and Armoy Construction. The loyalty of our supporters allowed us to tackle the challenging year that it has been and we can just about pick ourselves up for the next one. For that, I thank you all.

“Also, a sincere thank you to the local suppliers, who were kind enough to waive some of the club’s bills, to the numerous businesses and individuals that donated funds post-race, the spectators that travelled far and wide, who offered kind words of support and to the volunteers of the club who played a vital role in the 10th anniversary celebrations, it was very much acknowledged and appreciated.”

As the final loose ends of the 10th anniversary are put to rest, the Armoy Motorcycle Road Racing Club is looking forward to a fresh start in 2019, with initial plans being made in the next coming weeks.

Bill concludes, “It’s time to look ahead now, with 2019 quickly on the horizon, I hope you all will continue to support the club and I look forward to seeing how the 11th Race of Legends will take form.”