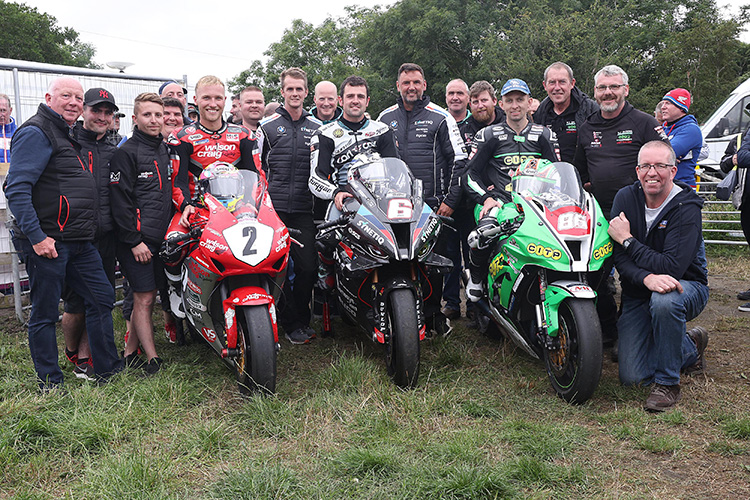 MICHAEL DUNLOP NINE TIMES WINNER BAYVIEW HOTEL RACE OF LEGENDS
PRACTICES and racing at Armoy took place at the weekend with some of the most thrilling road racing ever seen in the small County Antrim village. Friday probably saw one of the biggest crowd of spectators for practice racing and Saturday saw them return for a jam packed and exciting 13-race programme.
It was the road racing they came to see, and they were not disappointed as it was local Ballymoney rider, Michael Dunlop that stole the show with five incredible wins. He clinched the Bayview Hotel Race of Legends for the ninth time and set a new lap record in the Euro Autospares Open Race where the standing lap record of 106.812 mph was broken to set a 106.945 mph new lap record.
The TilesPlus Senior Classic also some great racing which resulted with veteran rider, Ian Lougher on a MV Agusta 500 for John Chapman Racing take first place, with Guy Martin second, and Richard Ford third in the 1000cc class. Barry Davidson topped the pole in the 500cc class with a win for Team Gimbert.
Earlier that day saw an exhilarating Stanley Stewart Racing Moto 3 (125 GP) Supersport 300 with Mike Browne, Melissa Kennedy and Eoin O’Siochru take the top three slots. All in all, each and every race gave the crowds two great days of racing.
The Clerk of the Course, Bill Kennedy MBE, who noted the additional pressures given the current pandemic and guidelines said; “If I had to sum up the last two days it would be brilliant. Michael Dunlop is in a class of his own, and we had some serious calibre of rider in Derek McGee who also set a new lap record in the ABO Wind Supertwin A race, Davey Todd, Derek Shiels and Michael Sweeney who all raised the bar.

“We had over 40 newcomers and the biggest entry ever, if I’m being honest too many but we wanted to give as many riders an opportunity to get some track time and we managed. It was great to see the likes of Phillip Crowe as a newcomer behind some of the experience riders and the likes of Jack Oliver get second in Brap Moto/Park Electrical Services Senior Support.
“Hindsight is a wonderful thing and although it was brilliant, Friday was testing with numerous practice sessions, red flags and two races to run as well. On Saturday we had two, one-hour delays but thankfully no-one was seriously injured during the races and I wish those injured a very speedy recovery. Joe Loughlin, who was taken to hospital by air ambulance, has already tweeted that he’s to be discharged tomorrow (Monday). I’ll be in touch with the families over the next few days.

“This year we had to abide by numerous guidelines and restrictions and that alone was challenging, however I’d like to take this opportunity to thank the spectators. They followed the protocol, stayed in their zones, didn’t walk on the road. Given the last few years’ challenges that road racing has faced it was great to see the crowd. This was the biggest crowd we’ve seen for some time, they were very well-behaved making marshalling so much easier. This was a very successful road race and bodes very well indeed for the future of this sport.

“There were a few benefits to the way we approached this year; we were able to presell tickets and programmes, segregate spectators into viewing places and zones before they got there. I’d admit it was late in the day, but that was dictated by requirements outside our control. There are lessons to be learnt but selling them from the start and placing them in locations that they want to be has a lots of positives.

“Given the success of the weekend it is clear that road racing has an opportunity for a financially good future.

“Thanks must go to those members in the Club, who volunteer freely of their time, and the officials, marshals, paramedics, PSNI, those in race control; everyone played their part in making this event happen and that’s so very important.
“The sponsors are without a doubt instrumental in making these races happen too. To our main sponsor Bayview Hotel and the many race sponsors, Hilton Car Sales, Mermaid Club, The Diamond Bar, Torra Homes, Stanley Stewart Racing, Tilesplus, McAlonan Oils, Euro Autospares, James McKillop, JW Hickinson & Co, Brap Moto, Clyde Shanks, Park Electrical Services, ABO Wind and MJF Builders; I’d like to say a sincere thank you to each and every one.

“We’ve had others help, those who sponsor a bale or take an advertisement in the programme. This is in addition to the very valued support by Causeway Coast and Glens Borough Council.

“Our first job is to dismantle the course, which has already started, thereafter we will take stock of 2021 and then all being well, begin our preparations for 2022.”

The highlights of Armoy Road Races will be on BBC One NI at 22.35 on Tuesday 3rd August or on BBC iPlayer. A full programme of the races will be on ITV4 at a later stage, details to follow.
This event was enabled by funding from Causeway Coast and Glens Borough Council. For more information on Armoy Road Races, search for ‘AMRRC’ on Facebook or follow on twitter @ArmoyRoadRaces.